Are my scripts running my classroom? 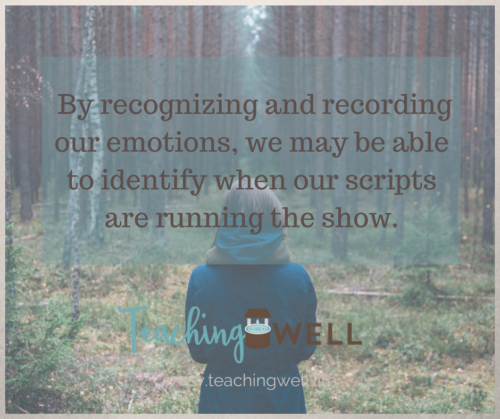 Our scripts can cunningly impact the way we work with our students.  A script is a conditioned emotional reaction to a trigger created in response to a past, emotional experience.  According to Tish Jennings in Mindfulness for Teachers, “a script is stored in your database of emotional memories that influence how you think, feel, and behave.”  By recognizing and recording our emotions, we may be able to identify when our scripts are running the show. Regular mindfulness practice may help us to respond to our students’ behavior rather than react when our brains switch to script autopilot.

Have you ever had a day like this…by the end of the day you felt exhausted, personally attacked and like all of the students had made a pact to make sure that they personally sabotaged you?

Last week at school, I had finally had enough of “Josh’s” misbehavior.  He was always falling asleep. Every time I turned his way his head would be down, again.  He always had enough energy to talk and joke around with his friends but when it came to being engaged in class his best response was to get comfortable, lean his head against the wall and within minutes his eyes would shut.  Most days, I would redirect him, try to engage him, and generally stay on him to insure his active participation. This only proved to make me exhausted and didn’t seem to have much impact on his behavior.

Finally one day at the end of class, my ability to respond was no longer there and I reacted to his behavior rather vocally and kept him after class.  My brain was on rapid fire, pummeling question after question: “Why won’t he just wake up?” “Am I that boring that he can’t pay attention?” “He obviously doesn’t respect me or the things I’m doing! Otherwise he wouldn’t be doing this!”

He looked rather surprised that he was still sitting in front of me and didn’t seem phased at all.  Unlike my brain which was still scrolling through the list of questions that needed to be cleared up.  I was able to keep a lid on my personal questions (for at least a few minutes) and asked him what was going on and why he continually fell asleep.  He at first told me he gets tired after lunch. This was a fine excuse for some students, but this wasn’t a pattern I had seen before in him.

After a lengthy conversation, he revealed some medical concerns with headaches and adjusting medication-all things I had not even considered.  My brain didn’t even allow for the possibility of something else being wrong: I was convinced that this kid had it in for me. As I listened, I tried to be open to what he was saying, offering support and encouragement.  However as hard as I tried, it was very difficult for the next couple of hours to truly shake the possibility that he had just done this behavior “to me”.

If this scenario sounds at all similar, then you (like me) may be working with scripts that often run the show in our classroom.  Scripts are cognitive reactions to certain behaviors based on prior experience. Scripts are the consistent stories that we tell ourselves about a student’s behavior.  When we take things personally and feel like they have a vendetta that will only be quenched by making our lives unbearable.

If you think scripts may be impacting the way you work with students in your classroom, there is good news!  Scripts are often the result previous incidents of implicit stored memory. So if you change your brain, you can change your scripts.  And changing your brain isn’t impossible. In fact, it’s very possible indeed.

How can I identify my scripts?

Before you can begin to work with changing your scripts, you need to identify what your scripts are.  Just by reflecting on some memorable classroom moments, you may already know some of them. I can easily identify that one of my scripts is “when students misbehave it’s because they don’t respect me.”

Because scripts are often so natural, they may not be quite so obvious.  So another way to figure out your scripts is to keep track of your emotions for a few days.

This emotion journal, may be a helpful tool to print out and keep at your desk.

When a strong emotion arises, write down the emotion, the incident and then delve a little deeper into what could really be happening.  By recording and analyzing your emotions, you become more aware of when those pesky scripts may be influencing your classroom environment.

Why do I want to change my scripts?

When our scripts are in charge, we are not actually responding to the incident that is happening in our classroom.  We are also being influenced by previous encounters that may be clouding our judgement about what’s currently happening.    By knowing what our scripts are, we can engage with students from a place of presence and not bring past “stuff” into our dialogue and interactions with students.

How can I start changing my scripts?

One powerful way to change your scripts is to begin practicing mindfulness more regularly.  Mindfulness helps to strengthen the prefrontal cortex which is in charge of reasoning and decision making.  By strengthening this part of your brain, your amygdala (your fight or flight mechanism) is not so quick to recall a script and react to a student’s behavior.  This change in command means more space between a student’s behavior and your response.

So, clearly working with scripts is an ongoing practice.  We will all forget at times and be triggered by the scripts of our past, but if we are trying to be present in our classroom, our students will notice and in time (and with practice) we will increase the space between trigger and response.  We will develop the capacity to work with students individually and not bring forward the experiences of our past.

What can you do right now?